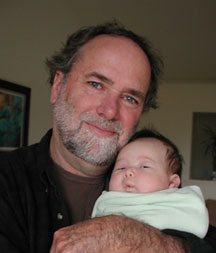 As a child of the Fifties and Sixties, born and raised in Southern California, Bryan could not avoid soaking up the pop culture and angst of that time and place. He was fascinated by cheesy Sci-Fi and horror movies, super hero comics, Mad Magazine, Salvador Dali, The Twilight zone, Zap Comics, etc……..  All of those influences plus the “duck and cover” mentality of the Red Scare had their shots at a sensitive mind. In addition to the constant threat of atomic annihilation, the Civil Rights Movement, Vietnam War, and the Kennedy and King assassinations further provoked a political awareness and a sense that all is not right with the human species. At an early age art became a way for Bryan to deal with and make sense of the world.

When the time came to choose an occupation Bryan studied architecture briefly but soon realized art was his best path to free expression. While attending Otis Art Institute in Los Angeles (Master of Fine Arts, 1974), Bryan took up with the early founders of the Chicano Art movement (Los Four). They introduced him to the Mexican Muralists’ work of the early 20th century and the value of a tradition of accessible work with social/political content. This realization combined with his early influences have come together in his work to create a unique and engaging  brew.

The continuing wars, terrorism, political hi-jinks, and the deteriorating environment have only reinforced his early perspective and provide a never ending supply of subject matter to work with. In spite of the disturbing nature of his topics, Bryan always manages to portray them in a humorous and seductive fashion.

Although most known for his political work savaging the Trump and Bush administrations, Bryan also directs many of his efforts inward, producing work from the imagination. At first impression, this surreal and whimsical work seems just for fun but usually contains underlying symbolic comment about life in these times and human nature in general.

Bryan has exhibited his work throughout the US, Canada, Europe and Japan. His work appears on numerous satirical and political web sites across the US and internationally. It has also been featured as illustration and cover art for publications, including Juxtapoz and Adbusters magazines.

Bryan has lived on the Central Coast of California for the past 44 years and tries to paint and surf as much as possible. He has a son, a daughter, four granddaughters, a grandson and a grateful attitude.