Q&A: Mark Bryan Knows Dick
Some might argue that Mark Bryan is too late to the table in making a new painting of a big easy target like Dick. But for this artist it’s the absolutely appropriate sum of multiple blunders that needed to be wrought out and bled onto a sin-soaked canvas. True Dick Cheney may not be fashionable anymore. Every joke in the book has been written about him, the guy is basically Lucifer incarnate and he is even rumored to bleed black goop. What else could possibly be said? Well, plenty more! And considering ANIMAL’s targeting of the VP, it would be a shame to not make use of every opportunity to throw the ol’ Dick a barb.

Mark graciously answered all 8 questions and detailed the motivation behind painting Dick. 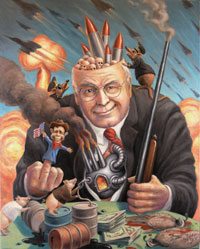 1. What inspired you to paint Dick Cheney?
Mainly because of anger at what is happening to our country. I don’t think of myself as primarily a political artist but events in these last few years have made me feel that comments must be made. I suppose it’s a way to get get back at them and maybe it has some therapeutic value for me. Why Cheney?, isn’t he really the one responsible for all this? I don’t think there are too many people left out there that think Bush has the brain power to plan or run anything. Also because it is just so easy. With these guys it’s not hard to do satire at all. They have become a really bad cartoon. Unfortunately we have to live in it. It might be funny if people weren’t dying because of them.

2. Do you think the Vice President may actually have a soft side?
That’s a tough question. I don’t really know. Probably, they say some of the Nazis were wonderful parents. I suppose there can be some kind of pathology that allows one to disconnect from the pain and suffering of others when it is convenient to your purposes and then go home and love your family. Some people say he was a decent guy years ago but something has changed in him. I kinda doubt that.

3. Whenever you see the VP does the Darth Vader theme song immediately pop into your head?
No, not really. Darth Vader, although Cheneyesque, is a fictional character. I think of Bob Dylan’s “Masters of War”

4. What’s the meaning behind Dick fingering Bush?
Well, when I started the piece I knew there must be a Bush puppet in it somewhere. At first he was hanging out of his coat pocket. Later I made him a finger puppet that was sitting on Cheney’s thumb. That looked pretty good but then I remembered how he told Senator Leahy to go fuck himself. Then I thought, isn’t that what he really is saying to America and the world? and using Bush to do it? So it seemed perfect to me to put him on the middle finger. As far as the sexual connotations of a finger up someone’s ass, I know there is that aspect to it but really that wasn’t the main symbolism for me. I’ll let people make what they will of that.

5. How do you feel about canned hunting?
It doesn’t seem fair does it? I think hunting is OK if you need the food to live on but how many of us do? It bothers me that it’s a sport with a guaranteed kill. Maybe it’s a culture that I don’t understand but is it surprising that killing something is a sport that Cheney seems to enjoy?

6. What’s up with the little rats on his shoulder?
When I first thought of doing this piece I immediately thought of rats crawling all over him and even inside his head. It was a subconscious image that just popped up. Maybe it came from the old dracula movie “Nosferatu” who was the king of the rats. Anyway, I made them into blood thirsty generals. I may have to revise that now that so many real generals are coming out against Bush’s war.

7. Are those dead quails in your painting? Does that imply that he actually shot those?
Yes, those are dead quails and I am implying that he shot them. To me they are symbols of all the death that he is responsible for.

8. Bill O’Reilly would probably call you a typical liberal leftist pussy, how would you respond?
That would be pretty much correct. But even so, he can bite my ass. That guy is the definitive egomaniac bully. He’s probably as bad as Dick, but at least he isn’t running the country. He may even be worth a painting.