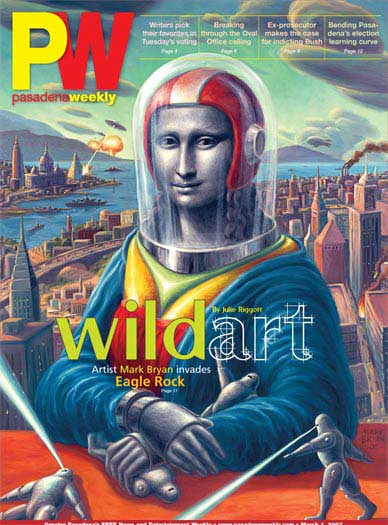 IIt’s an apocalyptic vision, but not without a sense of humor: Think “Alice in Wonderland” meets “The Last Supper” on a cover of The New Yorker. Our president, depicted as a tiny puppet in holy robes, wields a huge knife. Holding his hand in firm control of its aim toward a pastry-sweet Earth cake is Dick Cheney. On either side sit Condoleezza Rice, in blackface, and Donald Rumsfeld, pouring a cup of oil from a tank teapot, reveling in the party atmosphere overseen by skull “angels.” Alice and the Mad Hatter look on in slack-jawed shock and awe.

Welcome to Mark Bryan’s “The Mad Tea Party.” This painting and 27 others playing with the nightmarish aspects of the human condition are currently on display at Carlotta’s Passion Fine Art in Eagle Rock.

Inspired by Mexican muralists such as Diego Rivera and José Clemente Orozco, Bryan’s work has always made a social and political comment. One night in the 1970s, Cesar Chavez watched him paint a mural for the United Farm Workers with Carlos Almaraz, one of the Chicano artists Bryan befriended and learned from while a student at Otis Art Institute. But only recently did his disappointment with the human race take a specific focus on the current administration.

“About three or four years ago, I just couldn’t take it any more, so I decided that I would depict this criminal gang, as I call them,” Bryan said from his home on California’s Central Coast. “It’s really resonated with a lot of people, and now it seems like I’m known for that more than the bulk of my work, which is much more symbolic and subtle. But people are so agitated right now about what’s going on, so it makes sense.”

The exhibit’s called “Pictures in My Head,” and the paintings indeed suggest the wild, scrambled, weird visions and juxtapositions of dreams and nightmares that the creative mind uses to make sense of the day’s experiences. Some of the works — “Venus and René” and “Unnatural Magic” — are a tip of the hat to masters of surrealism René Magritte and Salvador Dalí.

Images of men as tornados, buildings as tanks and skeletons cheerily leading the way to death reflect Bryan’s anxiety about our violent nature and the male predilection for glorifying war. Traditional symbols of mirth and cuteness like clowns, babies and bunnies are warped in Bryan’s looking glass of cynicism and humor.

But his cartoon-like treatment of subjects and vibrant, cotton-candy colors soothe what might otherwise be simply grotesque. The artist’s skilled hand, respecting light and shadow, perspective and detail, lends a touch of sympathy to the carnival of characters in acrylic and oil.

“Mona and the Metal Men” depicts the Mona Lisa in a spacesuit with toy robots flailing at her arms, while the cityscape behind her is under attack by UFOs. It’s emblematic of Bryan’s work in its simultaneous depiction of the heights of beauty our creative brains can reach — such as the ethereal art of da Vinci — and the dark depths of imagination that conceive of alien beings as combative.

The death rays from the tiny spaceships in “Mona” appear in other works as paintings within paintings, symbolizing the sense of doom Bryan cannot seem to shake. “If you pay attention to what’s going on in the world, you can’t help but have this anxiety that things can change quickly,” he added. “It’s kind of like a cosmic pinball machine — you just haven’t fallen in any of the holes yet.”

Though he admits that his life is good, and nothing bad has ever happened to him, he has strong memories of growing up in Downey and Whittier in the ’50s and ’60s, the years of “duck and cover” drills at school and neighbors building bomb shelters. When he was 10 years old, he heard his dad, who was watching the news about the Cuban missile crisis before leaving for work, say, “Well, we should know by 10 this morning whether we’ll have a nuclear war or not. I’ll see you tonight for dinner.”

But Bryan doesn’t dump all that heavy worry on our shoulders. Like most great art with an important message, his work communicates, if not hope, then at least a much-needed measure of levity about the human condition.

“I try to mix humor into everything. Yeah, something bad could happen, but at the same time, it’s something pretty ridiculous too,” he said. “I’ve been criticized for taking a strong message and making it too silly, diluting the message by being too funny with it.”

“Pictures in My Head,” a solo exhibit of Mark Bryan’s work, will be on display through April 1 at Carlotta’s Passion Fine Art, 2012 Colorado Blvd., Eagle Rock. Admission is free. Call (323) 259-1563, or visit www.carlottaspassion.com

On March 17, Carlotta’s Passion will present “The Screaming Bunny,” a performance art piece involving a bunny sculpture created by Bryan. A $10 donation to The World Can’t Wait: Drive Out the Bush Regime is encouraged. To see more of Bryan’s art, visit www.artofmarkbryan.com .